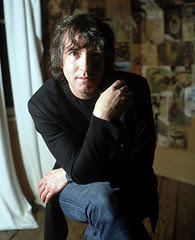 On their way to perform at SXSW in Austin and fresh from the Andy Warhol Museum (Pittsburgh) and the CAC in Nashville are Jonathan Kane, Rhys Chatham and Tony Conrad and bands. Evidently it will be a bit like Warhol and entourage on the road, inasmuch as they carry connections to Sonic Youth, Glenn Branca and the Velvet Underground. In Shreveport they will stop at minicine, 846 Texas, Tues, Mar 14.

Jonathan Kane is a Downtown NYC legend -- as co-founder of the no-wave behemoth Swans, and the rhythmic thunder behind the massed-guitar armies of Rhys Chatham and the rock excursions of La Monte Young -- and one of the hardest-hitting drummers on the planet.

With his solo work, Kane summons Swans' concussive wallop, Chatham's dense guitar strata, and the perpetual propulsion of 70s krautrockers Neu, then steers it all head-on into... the blues. Make no mistake about it: Kane is a bluesman, and beneath the high-decible bombast, he's powering guitar-driven minimalism into the blues, and the blues into guitar-driven harmonic maximalism. So roll with Jonathan Kane down his Highway 61 of the mind -- it's the shape of blues to come.

Says record company, Table of the Elements, about Rhys Chataham:

In the 1970s, New York composer Rhys Chatham altered the DNA of rock,
marshaling massed-guitar "armies" and fusing
overtone-drenched minimalism with the fury of punk rock. His work prefigured No Wave and cast a huge influence over the work of his proteges,
including Glenn Branca and Sonic Youth. Performing this material for the first time in two decades, this Downtown NYC icon revisits those glorious years in
the life of a city and a milieu in which the raw, the sophisticated and the danceable merged.

I'm listening to Kane's work at myspace.com/jonathankane and it's quite listenable minimalist blues.