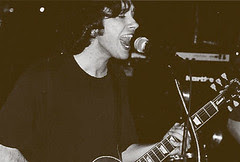 Start your weekend early, writes Brett Roman, with The Teeth
(Philadelphia) at Lil Joes Tavern on Thursday night. Representing the southern end of the galaxy in this show will be Mars Vegas.

Only $5 from your sleeping roommate's wallet, snorts Roman, the wily bassist for MV.

The Philadelphia-based band The Teeth have been, says theteeth.net, unofficially declared “the toast of the town” (Philadelphia weekly) and termed “defiantly original” (Morning Call). Their music is an eclectic brand of rock and pop stylings.

Who has influenced this dentalist group? Not the Who, but the Kinks, Talking Heads, Radiohead, The Velvet Underground, The Beatles, Sly Stone, Nirvana, and Elvis Costello.
Posted by Robert E Trudeau at 9:21 AM

KSCL is more like it for me and my type, toga. Thanks for the update. I thought maybe KSCL was on hiatus through the summer.

No, we're usually on from 6-9, sometimes with random schedule changes - like this evening.

ps. I haven't been called toga probably since Dan a.k.a. Gamma Pro a.k.a. 1/3 of the Pillage People moved away. It's nice to hear it again.