Reflections on a Sat night of downtown art and performances 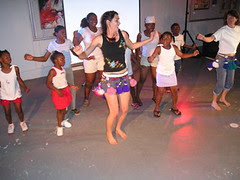 Some 100 people attended Cirque du Trudeau (with about 80 people present at the max), according to Chris Fowler-Sandlin, Artspace manager. And a diverse group they were. Additionally, numerous people told me they were seeing Artspace for the first time.

Observations about what I did right and what I could have improved:

* My idea of combining video documentaries of each performer along with their live performances was a dud. My version of the comparison was linear. Maybe someone will tweak the idea. As for me, I'm going to present one or the other.
* Reaching out across racial and class boundaries is virtuous. Verily, I challenge every arts producer in the region to include people from both sides of the racial divide in their programming.
* Artspace/Coolspace is a delicious venue. Art on the walls, stimulation everywhere, intimate size, fairly good acoustics.
* Technical items always bedevil and eternally need upgrading; with that in mind ...
SRAC supplied me with an adequate sound system, excellent video projector and a tech whiz, Duane Rousseau, who set things up on time and built a giant video screen for Coolspace.
The room lights at Coolspace really need a dimmer switch. The performers' spots could be upgraded to lovely effect.
Backup items are important. The mic - which had worked well at rehearsal - failed. Happily, I had a back-up mic ready to go.
I should have performed at least one more tech check. Miscues and awkward transitions could have been reduced.
* One more rehearsal would have ultimately served everyone well. My bad.
* Wine or beer would have been appropriate; Artspace is a restaurant, after all. Inadequate planning on my part.
* Asking an electric band to perform an acoustic set was smart. It helped Mars Vegas expand their palette and the audience was pleased.
* Putting on variety shows is beneficial in general. With this exposure Port Belly Project has been asked to be in a movie and encouraged to offer their own Coolspace show, says Kathy Fontaine.

In regards this whole business of evaluating art shows, please read Alex Kent's arts criticism article from Sunday's Times. It is quite an important meditation for both artists and sentient consumers.
Posted by Robert E Trudeau at 6:20 AM