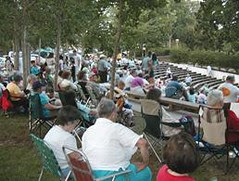 The heat does bother those who like the Summer Band Series at the amphitheater, aka the Hargrove Band Shell, at Centenary College. But they bear it with equanimity.

The Centenary Summer Band was founded in 1957 by B.P. Causey. The series ran until 1987, and was re-engineered during the summer of 2000 by Dr. Thomas Stone, Director of Instrumental Music at Centenary College.