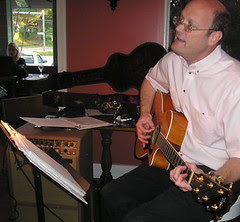 Songster Tim Marshall, playing Tuesday, June 28 at Columbia Cafe, brings several fine guitars, an excellent voice and a passionate sense of songwriting to his shows. Marshall can sing Beatles or Elton John but he shines with his driving originals.

While Linn has Columbia dining specials all week the promo that catches my eye is "Thursday 20% off all Beer! We have the largerst Beer list in North West Louisiana!" I'm not going to dispute his investigations. But I have certainly enjoyed investigating his beers. Pleasantly, there's a 2 to 7 pm happy hour during which inspections of the beer list are encouraged.

Linn also writes "After stopping an attempted vehicular murderer with our building and fountain a few months ago we are now repaired and better than before. Leonard Service completed and installed the new " Rays of Light" fountain Thursday June 23. Icing on the cake: it's a better-than-the-original rehab of our old water works system. "

Emailing Linn for why he described the assailant thusly brought this response: "Person in stolen 71 Chevy pickup running from ten police cars tries to run over two people walking across the street in front of LSUMC. He crosses the double yellow to try and hit them; they run/jump out of the way and he misses them. He then hits three cars at Line avenue. Traveling east bound he does a 310 degree turn at Creswell avenue. Under full throttle he goes over my fountain and under my building, taking out three pier supports. He gets out and runs away. The passenger gets caught and says he was a hitch hiker with bad luck. They catch the driver a few days later and charge him with two counts of attempted vehicular homicide , three counts of hit and run and two counts of property damage. I pay for everything cause he has no insurance, no money."

Ah, the art of operating a fine dining establishment.
Posted by Robert E Trudeau at 1:38 PM