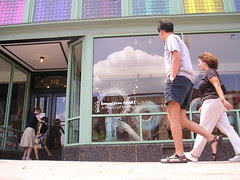 As people file into Artspace, or any local entertainment center, should a critic be slipping in beside them?

In an ideal world, yes. A schooled writer, in a perfect world, would visit Artspace and analyze the use of the space and write about it. The show by local artists in Coolspace would also get its turn under the purview of a critic. Performances would br reviewed, too. How else to know, really, how well we're doing?

Times writer Alex Kent, a schooled critic who is sent out to write about plays and symphony concerts, has asked for feedback about the role of the critic. The Times has printed a goodly array of letters - see the June 23, editorial page - on the importance of critical reviews.

A year ago the Times killed all reviews after a long history of providing next-day feedback about a variety of arts performances. This year editor Alan English has brought reviews back. I applaud English for repairing the damage and for offering the community a high level of discourse.

As much as I treasure the art of evaluation, it cannot be my role to write as a critic at SptBlog. The reasons are twofold: a) I want to make and display my own art. I want to participate. The ideal critic is one who is fully an observer. b) I have too many friends in the art community. A proper critic should not be inhibited by a plethora of connections.

That said, I would like to encourage readers to submit critical reviews to SptBlog. As a small example of what I'm thinking, please see my self-review of Cirque du Trudeau, my recent Coolspace production.

There's been a big outpouring of art lately. And much of the art being shown is not terribly worthy stuff. If there were a good critic writing about why certain pieces are accomplished and why other pieces are in need of improvement, we might see significant growth on the part of local artists.
Posted by Robert E Trudeau at 11:48 AM

Critics Needed is not a column destined to generate much interest.

But Times writer Alex Kent responded, I'm happy to say. He wrote, in part, "Thanks for keeping this discussion going. I'm still cooking up ideas on how we can improve coverage, specifically reviews, based on the responses I received (and based on some of my ideas)."

While I'm happy we're getting the basics from the Times, I believe writers in this town could offer much more evaluation of art and events.

If you know a writer that you think might have the thoughtfulness to write as a critic, please point them to me. I will be happy to offer guidelines and feedback to a developing thinker.

But aren’t area writers susceptible to the same problems local visual artists are having? Who’s reviewing their work?

You can’t even count on two hands, nay, ten hands, the number of local writers who settle for self publishing their writing instead of polishing it and then working to submit it to publishers or agents (this is an area I have strong feelings about). I think the worst offender is a gentleman who thinks he was nominated for a Pulitzer Prize when in fact his name was submitted to the Pulitzer folks for consideration but he was not selected as a finalist. One does not become a nominee without first being chosen as a finalist.

Then these self published books are being written about and discussed in the local media like they are “real” books while most book critics in larger markets or publications won’t even touch self published work.

I think also most area writers will run into the same problems presented in your original blog. Most are participating in the local art scene and many have friendships with other artists in a variety of disciplines.

Kathryn,
I understand your frustration. A writer who has polished their craft, convinced an agent to offer representation, gotten a publishing deal and produced a book in time-honored fashion represents a world of work and achievement.

Self-published work simply does not have to meet the classic standards, no matter how worthy the project may be. I know; my booklet How To Mardi Gras is self-published.

For the two types of books to be reviewed on equal footing rankles those who are attuned to quality and traditional standards.

Yet I must say that today the traditional guidelines are collapsing. Today books that are self-published are more likely to be judged on their usefulness rather than on their possession or lack of a New York label.

I agree that book reviewing here is like music and art reviewing. Too many writers are connected in ways that compromise the ability to be objective and thus truly helpful.

But the city gets a little bit of new blood. There are well-schooled newcomers at the med school and the air force base, for instance. There are students who may have considerable talent.

Wish we could get some of them started as perhaps a team of reviewers with their own blog. Failing that, hope they'll publish their views via SptBlog or Michael G Moore's http://nwlaartgallery.com under Critical Thinking.

Would you like to initiate the game of critical bocce by sending me a review?

Thank you for the invite but I haven't been fully plugged into the local art community since I went back to work over a year ago. I work nights and weekends so my ability to cover happenings is limited.

If you have any suggestions I'd be happy to listen. I'd be honored to be published on your blog. I don't know if you got my email a couple of weeks ago but in it I said you're doing what The Times, SB and Forum should be doing. I'm damned tired of reading about "medical news."

Thanks, Kathryn, for your enthusiasm for SptBlog. It means a great deal to me.

And in regards critical writing, your response in this Comment spot is in itself a form of writing and thinking for the community. Merci.