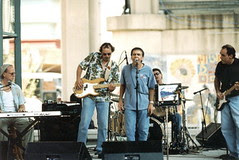 This just in from Helena, AR, heart of the upper Mississippi Delta : the winners of the King Biscuit Blues Festival competition, the Sonny Boy Blues Society Battle of the Bands, is Shreveport's AJ Cascio and the Two Tone Blues Band.

"There were some 50 bands that applied to the competition," said AJ, "and 11 bands were chosen to perform on Friday, June 17. We made the top 5; after playing on Saturday we were named the winner. We'll be playing the big stage at the King Biscuit Blues Fest on Th, Oct 6, 2005." There's more: "That qualifies us to play at the International Blues Competition, the IBC, in January, in Memphis."


"Dan Sanchez and the Kings of Pleasure, also from Shreveport," said Cascio, "took second in the Sonny Boy Battle of the Bands."