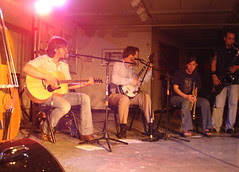 Buster Keaton's silent comedy The General will be projected larger-than-life as Dirtfoot plays.

Adds Jay, "I wanted to do a Robinson Film Center fundraiser that didn't cost an arm and a leg, so my friends could come out and show their support. A lot of us want to support the arts, but we can't really afford to unleash our inner philanthropist just yet. That's why we put this together when Lil Joes offered us the venue."
Posted by Robert E Trudeau at 5:16 AM

A few months back a pianist improvised alongside two Buster Keaton flicks on the big screen at Nelsonville Opera House in Nelsonville, Ohio. It was a big success!

Dirtfoot is by far the most original band Shreveport has seen. I hope they continue to receive more press and recognition. kudos