RW Norton Art Foundation Gallery: The Art of the Stamp 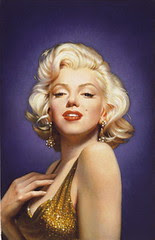 The Art of the Stamp is the new exhibit at RW Norton Art Foundation Gallery. To be viewed are 100 illustrations by America's top graphic artists.

From the Smithsonian's site: "For this controversial first stamp in the Legends of Hollywood series, eight artists were commissioned to produce color concept sketches. To create the final oil painting, Michael J. Deas used a studio photo from the early 1950s, although he made some modifications: Monroe's hand and shoulder are composites based on other photographs."
Posted by Robert E Trudeau at 7:10 AM