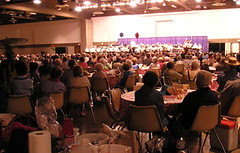 "Did you see the spread the Times gave us in the Preview section?"

Jennifer Akers, Shreveport Symphony Orchestra development director and member of the small SSO production team, gave much of the credit for the large audience Saturday night at the Picnic Pops performance to the Times' coverage.

"We pulled out all the extra tables and all of the extra chairs as the crowd continued to grow," said Janice Nelson, SSO general manager. "We've estimated the crowd at about 2000," said executive director Marty Albritton.

Tables were groaning with food and drinks. Ice chests were almost as numerous as the audience. Many tables were festooned with festive toonery.
"We've got to do much better table decorations next year," said Lisa Smith Kuzmanov. As she and Helen Taylor left the Expo hall in the late group they vowed that their table next year would go only in one direction: "Over the top!"
Posted by Robert E Trudeau at 7:31 PM