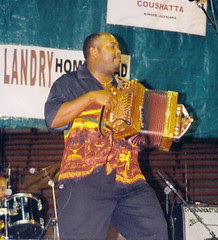 European countries, according to Zydeco Force, are places where "zydeco is still a fascination for many people. They may not understand the language, but the music is what fascinates their curiosity and keeps them asking for more." Lol. That sounds like Shreveport.

A couple of years ago Zydeco Force played the Krewe of Highland Ball. The band was like an armored tank of rhythmic power, all guns blazing. We jerked and bumped spasmodically about the dance floor, helpless victims of their percussive attack. We danced until our turbans were unwound and we sopped our sweaty faces with the fabric.

But they couldn't understand the audience in basic conversation. And the audience literally could not understand a word the band uttered. It's a Louisiana thing. People from deep in the bayou, Creole people, they got patois, a beautiful French-Spanish-African inflected speech that is often unintelligible to outsiders. And North Louisianians are among the outsiders.

Tonight you can listen to, dance to, Zydeco Force at Mudbug Madness from 6 to 8:30 pm. What I also recommend is chatting with them before or after the show. Creole patois and the accent that accompanies it make a beautiful sounding, colorful way of speaking. And these guys are charming.

Two food recommendations from our visit to the fest last night: Fried eggplant topped with crawfish, as raved about by correspondent Paula O'Neal, and the Crawfish etouffee.

Terrance Simien and Zydeco Experience are also an amazing group of entertainers. Terrance sings both your standard, punchy zydeco style as well as a beautiful falsetto that is strongly reminscent of Aaron Neville. if you can stay late, you will be enormously happy to ogle this zydeco star.
Posted by Robert E Trudeau at 8:30 AM