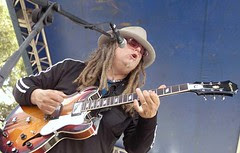 Papa Mali, co-founder of the Killer Bees and a former Shreveporter, is pictured on the stage at the 2004 Austin City Limits Music Fest. The ACLMF will take place in Zilker Park Sept. 23 - 25, 2005. The lineup is a music fan's dream, pointed out ramblin' Ken Berg, who added, "Got my tickets today. Hell yeah!"

Mali would be better known here as Mal Welbourne. He has been based in Austin since the Killer Bees and the late Michael Johnson moved there in the 1970's.

Mali plays the Joshua Tree Festival (California) next week. He reports, "I am so excited to play this festival - the lineup is incredible, the location sublime and I get to see my dear friend, singer/songwriter Victoria Williams who I grew up w/in Shreveport!" On May 26 he returns to Shreveport. With band the Instagators he plays the Mudbug Madness Festival. His comment? "You can take the boy out of the bayou but you can't take the bayou out of the boy."

Bandleader MALCOLM WELBOURNE's personification "PAPA MALI" is a salute to his home territory of north Louisiana. Malcolm was born in Mississippi and raised in Shreveport, where absorbing the blues along Bayou Pierre was just as much a matter of course as chasing the mosquito fogging truck with friends -- and equally intoxicating. He spent his summers with grandparents in New Orleans digging that city's rhythm (and blues) and after hearing the Wild Tchoupitoulas and the Meters on the streets of New Orleans at age eleven, he developed an early and ongoing attachment to Crescent City funk.
Posted by Robert E Trudeau at 3:31 PM

I went to school with Mal. Does that mean Victoria Williams was in my school too? Yow!