Rockin' Cajun and Zydeco: get your groove on with Mudbug Madness, Festival Plaza 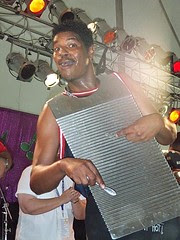 The Friday, May 27, Mudbug Madness schedule, big stage, brings us lunch with the Lightnin' Bugs (11am-2pm). They are an entirely enjoyable jazzy-raggae band, mellow as ice cream.

At the early part of the crawfish hour, 6:30 pm - 7 pm, there's a Cajun Dance Demo. Sounds like a good way to get the guys, ladies, into the groove and on the dance floor.

The Bluerunners are rockin' Cajun eclectic wild men. A zydeco 'zine review of a recent album says "Lafayette's Blue Runners may be one of the uniquest Cajun ensembles ever. Instead of solely being traditionalists or modernists mixing popular
rock influences the Blue Runners are a one-of-a-kind combination of traditionalism and the twangy fuzzy sounds of today's alt-country. Though a handful of songs are English sung they still maintain a Cajun identity especially given Adrian Huval's adaptive accordion playing."

From 9:30 pm to midnight let the crazy zydeco beat take hold of your system. Chubby Carrier & the Bayou Swamp Band may stun you with rhythmic power.

"Chubby was born in Lafayette, raised in Church Point, and is a third generation zydeco artist. As a child, he learned the music by listening to his father Roy Carrier and his grandfather Warren Carrier. He also learned tips from his cousins' BeBe and Calvin Carriere. His family and the King of Zydeco, Clifton Chenier, inspired Chubby," says his Swampadelic Records site.
Posted by Robert E Trudeau at 6:37 PM

The Blue Runners were fab: singing in French and doing the traditional thing, then pumping up the Cajun-zydeco dance side and sending scores of couples twirling onto the dance space, they were tee-totally solid. Thanks, guys. Loved your pedal steel guitar, too!