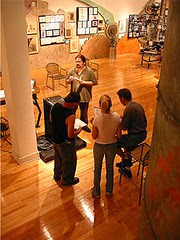 Artspace in the West Edge will present Museum, a one-act play by Tina Howe, on May 20 and 21.

Directed by John F. Daniel, the script exploits the comic characters that frequent a museum. It will be staged with actors wandering about the audience in the Mainspace of Artspace.

Reservations are not necessary due to the nature of the play, says Artspace. For more details, call 673-6535. The show is free to the public. But $5 for friends of the cast.
Posted by Robert E Trudeau at 12:31 PM

These folks are doing a great job. While I was waiting for some coffee @ Art Space I heard some yelling and arguing about “don’t touch the art!” I thought that a brawl was about to take place! I look over the balcony and it was just the group rehearsing.

God, Chuck. That link took me into an entire other universe. Man, I'd like to spend some quality time in your head.