Shreveport Symphony Orchestra board and musicians come together for 3 concerts in 2010; negotiations and fund-raising efforts re-opened 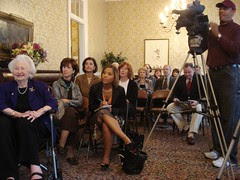 - Michael Butterman remains an active player in the re-tuning, said Bremer.
- The SSO has a current budget of about $110,000, added Bremer. The annual budget for the SSO at its peak was about $1.3 million.
- The Community Foundation has awarded the SSO a $70,000 challenge grant. Its purpose is to stimulate additional monetary pledges.
- Orchestra consultant Doug Patti - well-received by both musicians and board - will help guide the effort.
Posted by Robert E Trudeau at 10:11 AM

Well, that is certainly good news, after the agonizing silence we received from the two negotiating sides over the last year or so. I congratulate all the people who made this agreement possible, and thus allowed the SSO to get back on the road to recovery.

I have updated the SSO site at Wikipedia to reflect the new turn of events.
[ http://en.wikipedia.org/wiki/Shreveport_Symphony_Orchestra ]

A belated Happy Thanksgiving to all of you in Shreveport, who keep the spirit of the arts and creativity alive and well! (I enjoyed the smile on the face of Virginia Sheehee in your photo- it said it all!)

Now here I go copying a spelling from the photo caption, without checking it myself. :-(

Of course, that last comment referred to "Virginia Kilpatrick Shehee (born 1923), a Shreveport businesswoman, philanthropist, and civic leader who was the first woman to have been elected to the Louisiana State Senate."

Thanks for the spell check and thanks for attending to the status of the dear ol' SSO. We are honored.