Coming to the RFC on Sat, Nov 21: Louisiana-made movie Invisible Girlfriend - with the filmmakers 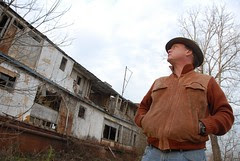 Coming to the RFC: "Invisible Girlfriend" with filmmakers, November 21
Originally uploaded by Robinson Film Center
"Invisible Girlfriend is a film we’ll be screening here at the Robinson Film Center on Sat, Nov 21 at 5:00 PM with the filmmakers in attendance. It’s a Louisiana-made documentary that is, simply put, one of the most difficult to describe films I have ever programmed at the RFC," says Chris Jay.

"It’s a road movie/portrait of rural and backroads Louisiana, as seen by a schizophrenic man from Monroe, LA who is riding his bicycle to New Orleans because he believes his girlfriend is psychically calling him there. And his girlfriend is Joan of Arc, and she’s invisible. Anything I could say about the strengths of the film is better said and summarized in this review:"

"A surprising and profoundly compassionate road trip about an America struggling to get back on its feet, with filmmakers Ashley Sabin and David Redmon working at the intersection of Flannery O'Connor Avenue and Werner Herzog Boulevard." -Ty Burr, Boston Globe

Any lover of southern lit or documentary film will find those to be fightin’ words – and I did, too – but I watched the film and found that I agreed 100% with that review.

p.s. If anyone wants to take advantage of that new bicycle trail through downtown, we’re offering free admission to anyone who bikes here for the film.
Posted by Robert E Trudeau at 3:48 AM