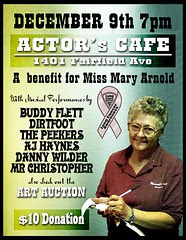 Miss Mary, Murrell's Grill, Shreveport
Originally uploaded by trudeau
Kern Courtney, musician and producer of the Miss Mary Benefit, worked extra hard to get the video ready for the local all-star show, which was held a year ago. He was elated when it became apparent that the cameras captured a fine night and an effective production.

Sun, Dec 6th, the Robinson Film Center is hosting the film screening of that night; it's called"The Biggest Tip Ever: The Concert for Miss Mary," and starts at 5PM. The benefit concert was held for iconic local waitress, "Miss" Mary Arnold, who had been diagnosed with cancer.

Featuring several local artists, including Buddy Flett, Dirtfoot, and A. J. Haynes and the Monkey Business, the film documents the benefit concert through retrospective interviews and live footage from the event.

Julieann Banks of Austin, TX, will perform before the film screening and during intermission. The Abby Singer Bistro will be offering $2 drink specials for attendees. Admission is $10 and includes a copy of the DVD. Also, a CD of live performances from that evening is available for an additional $5 donation.
Posted by Robert E Trudeau at 8:13 PM