Math and science education and the block system: will all Caddo schools benefit from a switch to block scheduling? 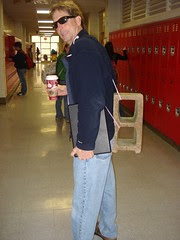 "'If it ain't broke, don't fix it.' This common sense is being ignored by the Caddo Parish School Board as it prepares to impose the dubious educational "reform" of block scheduling on Magnet High School."
Thus wrote Wells in a Nov 15 op-ed piece in the Shreveport Times.

"Our school, like some others in the parish, operates on a traditional schedule of six one-hour class periods per day. These classes are rigorous and challenging, with many of our juniors and seniors choosing to take Advanced Placement and Dual Enrollment courses, which earn them college credit.

Much research on the effects of block scheduling indicates that it does serious academic harm to student achievement. The University of Virginia reports that graduates from "block" high schools perform more poorly in science than those from traditional schedules. The College Board has reported a decline in AP test scores from schools which have changed to block scheduling.

Music, foreign language, and math classes are especially hurt from not having daily instruction and practice under the block system. Most versions of block scheduling keep students in a classroom for 90 minutes per class, but schedule that class to meet only every other day."

Wells adds, "The long-term effect of reducing time spent in a particular class by 20 percent will have to be a watering-down of the curriculum.

Maybe there are sound, valid, and logical reasons for the new policy. What are they?

Did the School Board discuss and vote on the new schedule? When?"

Meanwhile, President Obama is attempting to encourage rigorous and increased effort in science and math education.
Posted by Robert E Trudeau at 12:21 PM

Years ago I moved Edward to Magnet from Parkway mostly so he would not be subjected to Block Scheduling. I have a long story of the parent meeting where they explained how beneficial it was. I asked a question and embarrassed my then eighth grader, but left the room knowing we would have to find something else. Thank goodness he had the violin and there was no orchestra at Parkway. I didn't want to lie, but I would have if I had needed to.

I would be very happy to add my two cents worth if anyone thought it would do any good.

That was left by me. Nadine Charity