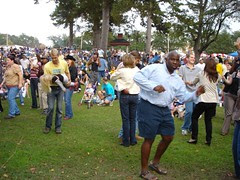 Highland Blues & Jazz Fest 09
Originally uploaded by trudeau
Blankets and chairs by the score were laid across the hills of Columbia Park by a diverse and vast audience (Kenney Koonce ests 7 to 8000) as the Highland Blues Fest was presented on Sat, Nov 14. The free fest featured music on 2 stages and a big-name headliner: the New Orleans' septet called the Rebirth Brass Band.

Strengths of the fest:
- sundry crowd, both in age and ethnicity.
- family-oriented.
- food and crafts booths adequate to nourish the crowd.
- beer.
- effective sound system (Glenn Graves, ta da!).
- smart team of volunteers, including fest founder Amy Loe, announcer Liz Swain and many more.
- handsome and soulful faces for the numerous photographers.
- opportunity for many attendees to avoid the car and use the bike.
- aerobic development stimulated by the Rebirth Brass band.
- Chicken Masala, by India's Restaurant, was scrumptious and only $2.
- an example for the city of an effective neighborhood fest.
- Highland in its best light: safe, convenient, multifarious.
Posted by Robert E Trudeau at 12:04 PM

It IS a fantastic festival for those reasons. It is the most diverse festival in this town, I believe. It showcases so much of what makes Highland a great place to be.