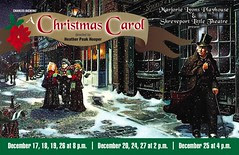 Heather Peak Hooper will direct this classic story based on Charles Dickens' novel, adapted by John Mortimer. Don Hooper is the Scenic and Lighting Designer. Alan Berry is the Technical Director.

Tickets are $10 for students, $12 for seniors and active military and $15 for adults.

The box offices at MLP and SLT will begin taking reservations on December 1. For reservations or further information, contact MLP at 869-5242 or SLT at 424-4439.
Posted by Robert E Trudeau at 6:17 AM