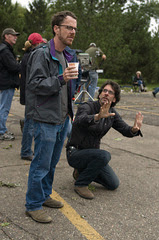 Film Title: A Serious Man
Originally uploaded by Redbrickpaper
A Serious Man is something like the Story of Job as told by Jerry Seinfeld. The post-Seinfeld Jerry.

This Coen Brothers story frames the early 60's acerbically and offers steady opportunities for rueful laughter. Oh, there we were, smoking pot when no one was the wiser. And weren't the institutions of common life - the neighborhood, school, the church - grindingly irrelevant?

Nor does the hero, Larry Gopnick, have a clue. An absent-minded math prof, his attempts to live a righteous life are smartly slapped at each turn.

Thank gawd for the additional comic relief that comes from the grandly quirky uncle, the proto-feminist neighbor and the smarmy guy who seduces Gopnik's wife.

In the silky flow of mundane Americana the Coens embed the music of the Jefferson Airplane and even score a dental scene with Jimi Hendrix' live version of "Machine Gun." It's outrageous but effective.

More at the Robinson Film Center.
Posted by Robert E Trudeau at 8:59 AM