Were you an extra in The Mist? Stephen King / Frank Darabont movie shot at StageWorks of Louisiana releases trailer 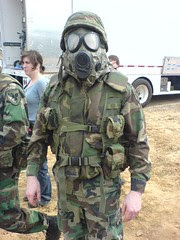 DSC00153
Originally uploaded by Dolemite T
The Mist is a 2007 horror film based on the 1985 novella by Stephen King. The film, written and directed by Frank Darabont, was filmed at StageWorks of Louisiana, says wikipedia.

John Grindley, Robinson Film Center, announces, "The trailer for The Mist has hit the web:" the Yahoo preview for The Mist.

The Times' Alex Kent says that exteriors were filmed in the atmospheric suburb of Hollywood South called Vivian.
Posted by Robert E Trudeau at 7:24 AM

What type of gas mask was used in the soldiers outfit (in the picture) in the mist movie. I have been looking all over for it for a halloween costume and can't find it anywhere. Please help I would really appreciate it.