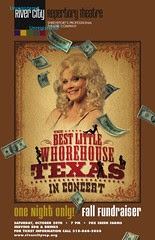 BLWIT fund raiser for River City Rep, Shreveport
Originally uploaded by trudeau
A one-night performance of the Best Little Whorehouse in Texas will take place at Fox Creek Farms on Sat, Oct 20, at 7 p.m. The evening, a fund raiser for River City Rep - Patric McWilliams, et al - is to be a relaxed affair which will feature drinks and a BBQ meal prior to the performance.

Based on the true story of the Texas brothel known as the Chicken Ranch, the musical received eight Tony Award nominations when it opened on Broadway in 1978. The score contains favorites such as “Hardy Candy Christmas,” “The Bus From Amarillo” and “Girl, You’re A Woman.”

McWilliams says, "Join us as River City Rep moves into its second season. Enjoy BBQ and drinks and don’t miss your chance to catch up with Miss Mona and her girls as they serve up good music and dance."

Kind of pricey for a concert that features a singer you can see for free at the casinos.

Whorehouse fundraiser! I love the headline... Shreveport Madam Annie McCune is in her grave giggling.

It's not about the price or your ability to see a "singer you can see at the casinos for free." It's about a PROFESSIONAL theatre company,the first of its kind in this area, developing funds and support to move forward and continue creating a level of theatre that is above and beyond what currently exists.
Stop being so jealous and negative. You should be proud that Shreveport has a professional theatre. Not a lot of cities do.