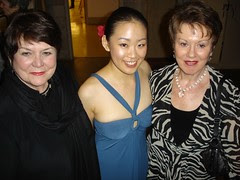 Lester Senter Wilson, Yoounjung Han, Nancy Edmonson
Originally uploaded by trudeau
From my front row vantage at the Shreveport Symphony Orchestra's opening concert concert Sat night, I could see a concert hall filled to the highest bank of seats in the balcony. On the stage, Michael Butterman trippingly told stories about the composers and pieces to be heard. The musicians, some 40 of them, played with discipline.

It was reassuring to see that 60 years after its founding, the SSO remains a community magnet. To mark this anniversary the founding conductor, Maestro John Schenaut, was guest conductor for the Star Spangled Banner. Though confined to a wheel chair, Schenaut visibly enjoyed the moment. The audience seemed to reciprocate.

The bill of Mozart, Liszt, Schubert and Tchaikovsky did not amount to a pyrotechnical evening, which is where Butterman enters the scene. He sells the audience a piece of music by using his conductor's insight
and succinct, witty style.

Pianist Yoonjung Han, a Korean lass of 22 years, played the Liszt Piano Concerto No 1 with graceful hands and passionate body English. Since we sat on the keyboard side of the hall, we could see the tiny performer's hands grow into spidery bridges, arcing across octaves.

At evening's end the audience congratulated the musicians and Butterman and itself via sustained applause. And the Maestro was ready for it. With graceful bearing and cogent timing he closed the evening with a quiet 20th century piece, Ravel's Pavanne.
Posted by Robert E Trudeau at 2:12 AM