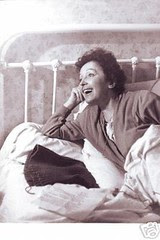 Édith Piaf knitting 3
Originally uploaded by Judikins
The Robinson Film Center has a French biography, en Francais, for one night only. It is La Vie En Rose, the well-mentioned life of singer Edith Piaf.

This story (I refuse to print the term biopic) of the iconic French performer follows her life from teenage street performer to international superstar, highlighting her loves and struggles along the way.

Says Chris Jay, "We booked the film because of the near-deafening buzz about the lead actress’ performance as Piaf, and to test out Shreveport-Bossier City residents’ receptiveness to foreign-language fare (the film will be presented in French with English subtitles). The local reaction has been pleasantly surprising, as we have sold about 150 of the 300 tickets available."
Posted by Robert E Trudeau at 4:39 PM