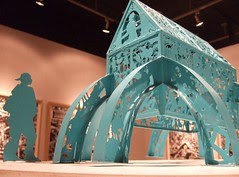 Scott was born on a farm in the Gentilly section of New Orleans; his father was chauffeur to the owners of Kolb's Restaurant. When he was 7, the family moved to the Lower 9th Ward.

His love of art may have been sparked when his mother taught him to embroider.

An exhibit of his work entitled Spirit House is on display at Meadows Museum of Art, Shreveport. In addition to his work, there are t-shirts and jewelry based on his designs.

Thanks to Taylor Caffery in Baton Rouge for first word on Professor Scott's passing.

Taylor also wrote, when I asked him whether he'd gotten acquainted with Scott: "Mary Ann worked with him on a major design project at the New Orleans Airport, Concourse C. She has been terribly distressed at his pulmonary fibrosis, which came from all the metalworking he did. He'd had two lung transplants, and the docs had to feel relatively positive to do that. Yes, I hope we can get to see the Meadows exhibit, too."