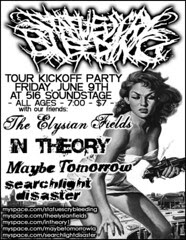 Statues Cry Bleeding and other baroquely-named rockers Searchlight the Elysian Fields of 516 Soundstage Fr, June 9
Originally uploaded by trudeau.
Join beatmeister Mark Goff and his 516 Texas St team for a megabit of original sonic art on Fr, June 9. The very intelligent and wildly coherent Statues Cry Bleeding - their singer, Mykl, can play the digeridoo as well as perform self-tonsillectomies - are the polyvinyl headliners.

Here's a droll review lifted from their extensive web site at statuescrybleeding.com:

"Statues Cry Bleeding is a bipolar band of sorts, much like similar minded acts such as Between the Buried and Me. At their heaviest, Statues Cry Bleeding use mathematical songwriting methods, odd, shifting time signatures, and polyrhythms much like Meshuggah, Coalesce, and Botch have done many a time. The breakdowns are staccato-driven, oddly timed, and palm muted for maximum impact. Vocals are usually a high-pitched, hardcore screech during most of the heavy parts, but they tend to drop into grind/death territory at the end of songs... I’m led to believe that with an opportunity for a full-length album and better sound quality that these guys could deliver a gem in the crowded mathcore scene."

- pivotalrage.com
Posted by Robert E Trudeau at 3:52 AM