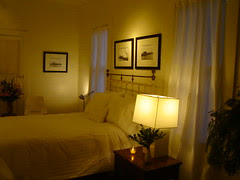 Rebecca Hudsmith's third entry in her report from Arnaudville:

" I traveled by foot down the road a bit to Turtle Cove Studio, an art gallery and guest house, where photographer Monique Michelle Verdin's black and white photos of her French speaking Native American relatives from the bayous and marshlands of coastal south Louisiana were on display."
The Turtle Cove Studio is located at 155 Fuselier Road, and the phone number is 337-232-3677.

From the Univ of California Riverside lecture series comes this description of Monique Verdin:

“Southern Louisiana is our Chiapas: a tragic and beautiful land that has become an epicenter of indigenous resistance to ecocide and ethnic cleansing. The native Americans of the Gulf parishes are an almost invisible people, yet their gritty endurance in remote villages and lost bayous is an epic story. Now, in the wake of hurricanes Katrina and Rita, a majority of them are without homes or livelihoods, and they face perhaps the greatest challenge to their cultural survival since the French conquest. Monique Verdin is a daughter of the Pointe-au-Chien tribe. She is also an extraordinary photographer who has chronicled her people’s difficult struggle in a rapidly disappearing landscape. She documents how corporate greed has poisoned the bayous and accelerated the erosion of this country’s most magnificent wetlands. She also depicts the pride and quiet heroism of people like her incredible 90-year-old grandmother Armantine Marie Verdin who escaped Katrina’s wrath in a traditional piroque (flat-bottom canoe). With her companion, the Cajun actor-activist Mark Krasnoff from Ville Platte, she has also been keeping a photo and video diary of how southern Louisianans - Black, Creole, Cajun and Indian - have responded to the ultimate disaster.”
Posted by Robert E Trudeau at 6:12 AM