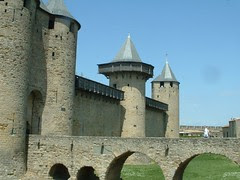 carcasonne7
Originally uploaded by Ernie3.
Generous celeb Kevin Costner will give yet another Shreveport performance, says Pam Atchison. In this one he will help open the downtown celebration called Funky Fridays.

The actor-rocker will appear in green leather garb on a giant outdoor screen set up in the 700 block of Texas St. As the character Robinhood, Prince of Thieves, he will strut for the audience, ride hard and shoot unerringly before disappearing in the direction of Greenwood.

"This is somewhat of a PR coup, I must admit," said Karl Hasten, editor of Forum Newsweekly.

5:30 in Coolspace inside Artpsace: reception for art by Jerry Lyles.

7 pm: $5 admission (collected somehow; this could be amusing) to the "Funky Friday Festivities."

9 pm: Robinhood, Prince of Thieves; Mr. Costner, in suede vests with marvelous blouses, projected on a giant outdoor screen with super sound system. Chairs? Use the ones provided or tote your own.