McCaa sings a new single, "Shreveport, you're a big dog now" from new album, Under a HooDoo Moon; see the AFM116 site to listen and download 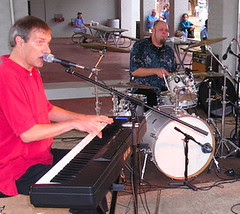 McCaa sings the blues in the park
Originally uploaded by trudeau.
Chris McCaa has a new single, Shreveport, You're All Grown Up, and a new album: Under a HooDoo Moon.

Heavily influenced by the music of New Orleans and the blues scenes in both Memphis and Austin, Chris McCaa plays keyboards, sings, arranges and writes tunes, says his web site at http://afm116.org/feature/chrismccaa.html. Enjoy and download the single at his site.

As a journeyman performer McCaa has pounded the piano for several of Louisiana's most popular bar bands. The list includes A-Train in the 1970s, The Red Hots in the 1980s, and the MTV award-winning Insatiables in the 1990s.

Chris has returned to his roots as a Louisiana professor, or pianist (implied as an entertainer in a bawdy house). Taking the moniker of Professor Porkchop, Chris created a band that takes you on a musical trip through the bayou, to New Orleans and beyond.

You can catch Professor Porkchop behind the piano at restaurants or with his band on the Red River gambling boats.

Listen to his single entitled, Shreveport, from the upcoming album, Underneath a HooDoo Moon, on the Larry Ryan Show on KLKL - Oldies 95.7FM.

McCaa is also pres of the American Federation of Musicians local 116. See more about the 116 as well as book musicians and groups of all sorts at the AFM116 web site: http://afm116.org/index.html

Wow, Chris McCaa takes me back to my college days - I used to watch the Insatiables play at the Precinct and Club Isabella back then. Good stuff!