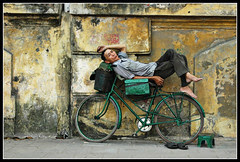 chillin
Originally uploaded by jaymce.
Says Susan Garner, who works at a bike shop and is one of the town's youngest gatekeepers, "Critical Mass correction!!! CM is this Saturday. Ok, so excuse me for believing the flyers. Critical Mass will be this Saturday, July 1. It is still at 5:30 and still at Columbia Park, though. If you are going to the benefit show at Java Junction at 7:00 pm, you will be finished riding by then, no fears. Bring your bike and have fun."
- The Analyst


Kevan Smith is an info source on CM, too. Smith, who might be the founder of the local version of Critical Mass, says "5:30. The Columbia park lot right in front of Creswell school. But don't think radical critical mass. Think fun bike ride. Shreveport isn't the place for U-lock wielding bike radicals, but there are enough bikes out now due to a variety of factors that starting the critical mass seed growing could help teach cyclists and motorists to get along."

Kevan has an acerbic media blog focusing mostly on NPR and Red River Radio - where he worked - and, on the other hand, KSCL, where he has a show "Friday evenings from 6 to at least 8."

Check out the well-read Smith and his acidic mediavasions at http://homepage.mac.com/cuthulu/blog/blog1.html.
Posted by Robert E Trudeau at 7:17 PM