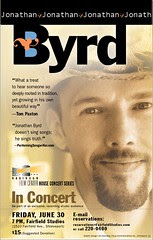 Shreveport, Fr, June 30, Fairfield Studios
Originally uploaded by trudeau.
Says singer Sandra Odom about the next house concert artist to perform at Fairfield Studios, "Jonathan Byrd was one of my favorite favorites at the Kerrville Folk Festival this year. His clean, poignant style combined with a laid-back delivery is very appealing. There's nothing simple about this guy.....he simply hits the right note at the right time.

So come take a chance on a nationally touring singer/song-writer who will take you on a magical musical tour and see if he speaks to you like he speaks to me."

Fact is, Byrd has his own description in wikipedia.com: "Jonathan Byrd is an American singer-songwriter based in Carrboro, North Carolina. He is best known for his narative tales of love, life, and death in America. In 2003, he was among the winners of the New Folk competition at the Kerrville Folk Festival. He set a record for CD sales at the festival that year, making more sales than the main stage acts. His song, "The Ballad of Larry" has been listed a "Top Rated Song" by Americana-UK. He primarily performs solo and accompanies himself in a variety of traditional acoustic guitar styles. His recordings have featured a variety of instrumental ensembles and typically include one or more instrumental tracks that feature Byrd’s skillful flatpicking technique. Occasionally he also appears with the Athens, Georgia based world music duo, Dromedary."