Are you a fan of ZeFrank? Innovative web-based commentator / comedian shows way for next generation of entertainers 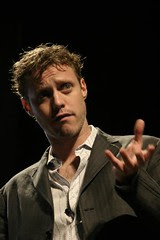 ZeFrank_26.JPG
Originally uploaded by Pop!Tech 2004.
Last week my daughter Annabel turned me on to the high-energy, thoughtful web videos of Hosea Frank, a Brooklyn-based gadfly. I haven't seen enough of him to fully evaluate, but what I've seen so far is exciting. It's partly his talent, partly the possibilities he's exploring. Here's an excerpt from a NY Times story, but better yet go to zefrank.com and check out his video reports.

Like a lot of young adults, Mr. Frank, 34, has a Web site, zefrank.com. There, he documents elaborate and often ridiculous stunts of his own creation, like having two people on opposite sides of the world simultaneously place pieces of bread on the ground, creating what he calls an "earth sandwich."

Since mid-March, Mr. Frank has also been producing daily video shorts for his site, starring himself. The shorts typically feature a bug-eyed Mr. Frank talking directly into the camera about subjects like MySpace, government wiretapping and Iraq. He also indulges in the occasional stunt, like pouring chocolate milk all over himself.

His site draws around 10,000 viewers a day, and many of them use the site's comments section to praise, argue over or eviscerate his abilities as an entertainer. So Mr. Frank turned the tables.

With help from a programmer friend, he set up the comedy-writing equivalent of a Wikipedia page — an online site where anyone could write a joke and edit or even delete the jokes of others — and told his viewing public that if they were so brilliant, they could collaborate to write a script for his show. If they did so, Mr. Frank promised, he would faithfully execute it, no matter how absurd, and post the resulting video on his site.

He called the event "Fabuloso Friday," and gave it a slogan: "Where you think so I don't have to."

Much has been written lately about "the wisdom of crowds." The idea, promoted by the author James Surowiecki in his book of that title, is that large numbers of loosely connected strangers are better at solving problems and predicting the future than a few elites. But what about the wit of crowds? Could a vast network of volunteer writers from around the globe be funnier than a lone comedy writer in a one-bedroom apartment in Cobble Hill?

Mr. Frank thought that farming out his script would provide some answers. Which explains why at 11 a.m. on Friday, June 9, he was sitting before a video camera with freshly dyed red hair, wearing a fake mustache, puffing a fake pipe and stroking a stuffed cat, sitting in an armchair next to a globe, a rubber duck, two pieces of white bread and a framed portrait of Clarence Thomas, the Supreme Court justice — an absurd array of props mandated by the script.

"The meta joke here is, 'See how hard you can shake the marionette,' " Mr. Frank said between takes. "There's a violence to it."

Mr. Frank (he pronounces his first name "zay," derived from his real name, Hosea) is an interesting point man for the nascent craft of Wikicomedy. He grew up in Albany and got a degree from Brown University, where he studied neuroscience.

In 2001, he whipped up an online montage of silly dance moves called "How to Dance Properly," and sent it to 17 friends. They in turn forwarded it to others, and it became an Internet phenomenon: Within a week it had been viewed more than a million times, a huge number for a personal Web page. Mr. Frank said he felt an incredible rush from all that Web traffic.

"I became so obsessed with popularity," he said.