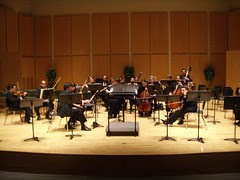 The Orchestra Warms Up
Originally uploaded by bratsch.
The Shreveport Symphony Orchestra, Shreveport Opera and Strand Theater are in fairly deep trouble, reports the Times. There are some bright spots: attendance at SSO concerts has been at a 5-year high. But the people at the heart of the SSO, the musicians, have taken a 15% pay cut. Jobs at each organization are being cut. Herein, a group of optimistic people give the details of a dark story.

No matter how they fared, arts groups say they are far from stable. Most are limping away from their battles to cut costs and streamline operations, two tactics that many say are curbing organizational growth.

The Shreveport Opera ended the year with dazzling ticket sales and a dizzying $100,000 deficit that is putting the 57-year-old company's existence into question, according to Eric Dillner, Shreveport Opera general director.

"We are in serious trouble," Dillner said. "We have an endowment intended for the longevity of this company but right now we use it as collateral, and we make good on our payments. But if you can't, then what do you do? You close your doors."

Dillner attributes the deficit to a trickle-down effect from Hurricane Katrina. His organization relies on a relationship with the New Orleans Opera as well as in-kind support, both of which were burdened by the hurricane and caused the local opera's production costs to soar.

The opera saw the bottom fall out of its corporate support. It also lost about $70,000 on its youth outreach program because it was forced to cancel shows in hurricane-devastated areas of Louisiana. The company ate up its two-year surplus of $70,000 to help offset costs. Three staff positions were eliminated, leaving Dillner and his development director, Andrea Frentress.

"We are writing grants and proposals to corporations as fast as we can, but the reality is the individual donations are where we're going to pull through this whole thing," Dillner said.

Individual donors, making up a quarter of the opera's budget that falls just under $700,000, were up 34 percent compared to last year. The opera is increasing its 2006-07 budget to $900,000, which includes the unpaid debt from this past season. To reach that goal, it is planning an Italian-themed fall fundraiser called "A Taste of Italy."

The Shreveport Symphony Orchestra, which started the season with a projected deficit of more than $200,000, will welcome Michael Butterman, its new music director, with a balanced budget this fall. To get there, it made a 15 percent pay cut to musician salaries and eliminated $125,000 in operating costs. It also scrambled to cover $60,000 in state funds frozen following Hurricane Katrina and relied on $150,000 in one-time donations the board had helped to raise.

Scott Green, executive director, attributes part of the group's balanced-budget situation to drastic cost cutting, a five-year high in ticket sales and a successful annual Constellation Ball fundraiser, which overshot its goal and netted $80,000. But he added the symphony believes long-term success will not happen by continuing to hack away at the organization. "We've got to continue to grow," he said. "We've got to grow our income resources, and we want to be fiscally responsible to the community."

The symphony decided it lacked a cohesive vision and developed two task forces composed of musicians, board members and staff to revisit its mission and develop a long-term strategic plan. The budget for next year has not yet been set, but it will be similar to this year's and will reflect a $100,000 bank debt. The symphony also has a $200,000 restricted endowment and has created a separate Shreveport Symphony Foundation that now has a little more than $100,000.

As far as musician salaries go, the symphony said it cannot legally discuss how it will handle a 15 percent pay cut that caused many players to question the viability of performing locally.

Paul Gray, a Shreveport native who lived in New York as a flutist and tutor for more than 40 years, has attended several symphony concerts since moving home last year and was impressed by what he heard.

"Shreveport has a first-rate orchestra," Gray said. "The orchestra is far better than when I was here before, and I think it deserves better than it is getting. These are people who have spent their lives learning a craft and learning how to do it well. Yet they can't make a living at it and to me there's something wrong with that."

The Peter Pan Players went all out for an elaborate December production of "Beauty and the Beast," and lost money on the show despite high ticket sales. Expensive set rentals, costumes and royalty fees put the youth theater troupe $10,000 in the hole. But a new fundraiser that followed the production, titled "I Am an Actor," brought in $7,500 to offset those losses.

"Even though we lost money on 'Beauty and the Beast,' we feel we raised the bar as far as the artistic endeavor," said Kathy Melancon, Players coordinator. "We look forward to the upcoming year, one to put us in the black."

The Players, which borrowed against its assets and has a credit line that adds up to about $144,000 in debt, continues to look for ways to do more with less to help pay for the remaining losses from "Beauty and the Beast." It will start next season with a budget of $100,000 and plans to tone down costs for this year's holiday show, "The Sound of Music." It is relying heavily on in-kind donations and volunteers, and will eliminate some of its biggest costs by building the set locally.

Despite the cost cutting, Isobel Rudy, artistic director, assures that production quality will not falter. "You have to take risks," she said. "I'm not going to play down to the children. That's all there is to it."

The Strand Theatre saw ticket sales climb this year to 68 percent from 56 percent during 2004-05. Every production made a profit, and two large-scale musicals sold out.

"This is not a guaranteed business," said Danny Fogger, Strand executive director. "If you make money on every show, that's pretty good."

The Strand decreased its budget this year by $300,000 and cut its season in half after 2004-05 ended a second straight year of sluggish ticket sales. Three seasons ago, the group was averaging between 70 percent and 80 percent in ticket sales.

The Strand also saw $93,000 in profits. Rental fees were up, and production expenses were smaller because of the lower number of shows. Fogger also cut back on administrative costs, which included the elimination of a booking agent and a general manager. Next year's budget is back at $1.2 million for its 11-show run.

The new River City Repertory Theatre, Shreveport's first Actors' Equity Association-sanctioned theater group, has managed to raise $70,000 to date through a fundraiser and mailings and will put on its kickoff production, "The Little Foxes," on June 29. This response indicated to Patric McWilliams, artistic director, that the community is hungry for the arts.

"People have been wonderful and they readily opened their checkbooks before we even had a product, and it made me feel good that they respect us enough to do that," he said.

"This community has supported a symphony, an opera, a ballet company and more. I think the city here has shown they do want a strong cultural life."
Posted by Robert E Trudeau at 9:27 AM