May your Solstice be celestial; some are nodding to the vibes emanating from Salisbury Plain, home of the Blues & Sarsens of Stonehenge 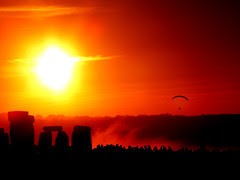 Flight Of The Solstice Dawn
Originally uploaded by tarotastic.
Of the summer solstice and the stone ring called Stonehenge, here's a bit of the NYTimes coverage:

"About 19,000 New Agers, present-day druids and partygoers gathered inside and around the ancient circle of towering stones to greet the longest day in the northern hemisphere as the sun struggled to peek out against a smoky gray sky.

''This is the nearest thing I've got to religion,'' said Ray Meadows, 34, of Bristol, England. The solstice ''is a way of giving thanks to the earth and the universe.''

Meadows, wearing a wreath of pink carnations over long pink hair-wrapped braids, identified herself as a fairy of the Tribe of Frog.

Stonehenge, on the Salisbury Plain 80 miles southwest of London, was built between 3000 B.C. and 1600 B.C. The lichen-covered rocks are a major tourist attraction and have spiritual significance for thousands of druids and New Age followers."

The article closed with "Groups of tourists, some from France, Italy and Spain, joined British revelers. Daniel Estera, 25, flew from Barcelona for one night at the solstice with 15 friends.

''It is part of a family tradition to see a solstice monument from around the world,'' Estera said. ''It is about respect for ancient cultures.''

How and why the monument was built remains unknown. Some experts say its builders aligned the stones as part of their sun-worshipping culture, while others believe it was part of an astronomical calendar."

The manager of the most famous of England's numerous great stone circles, including Avebury, is called the English Heritage and manintains this newsy site:

In Shreveport, Druids and Baptists announced plans to gather at the Amiss Water Treatment Plant for a midnight inundation and consciousness growth session. Said Mayor Hightower via assistant Liz Swaine, "I'm leaving town effective immediately. When the Druids and the Baptists start cooperating, that qualifies as one of the signs of the cataclysm. And if the world's going to end, I want to see it out from atop Loew's Anatole, not Thrill Hill."
Posted by Robert E Trudeau at 3:07 PM

I think it's fantastic that that circle of stones is still standing and is a still a mystery after all these many centuries. It is worthy of praise and possibly worship for that alone. I wonder if anything we've made, other that just global mischief, will be around when we are gone.