Katrina blues: Fraud vast in wake of hurricanes, says NY Times; cost to taxpayers may go to $2 billion / did you get yours? 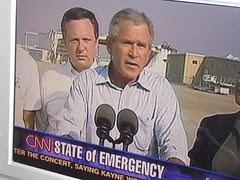 Katrina: FEMA's Brown & Bush
Originally uploaded by MarianDouglas.
WASHINGTON, June 26 NY Times — Among the many superlatives associated with Hurricane Katrina can now be added this one: it produced one of the most extraordinary displays of scams, schemes and stupefying bureaucratic bungles in modern history, costing taxpayers up to $2 billion.

A hotel owner in Sugar Land, Tex., has been charged with submitting $232,000 in bills for phantom victims. And roughly 1,100 prison inmates across the Gulf Coast apparently collected more than $10 million in rental and disaster-relief assistance.

There are the bureaucrats who ordered nearly half a billion dollars worth of mobile homes that are still empty, and renovations for a shelter at a former Alabama Army base that cost about $416,000 per evacuee.

And there is the Illinois woman who tried to collect federal benefits by claiming she watched her two daughters drown in the rising New Orleans waters. In fact, prosecutors say, the children did not exist.

The tally of ignoble acts linked to Hurricane Katrina, pulled together by The New York Times from government audits, criminal prosecutions and Congressional investigations, could rise because the inquiries are under way. Even in Washington, a city accustomed to government bloat, the numbers are generating amazement.

More in the story 'Breathtaking' Waste and Fraud in Hurricane Aid.
Posted by Robert E Trudeau at 4:33 PM

I just got back from NOLA for the first time since the flood. They played host to 20,000 librarians. Some places were ready; some where not. I am thrilled the ALA picked NOLA because it was a good gesture, but there is still much to be done. I'd say my main diagnosis is that the entire city is in depression, which is certainly understandable.

I can't believe Laura Bush had the cahones to show her face in the city at this conference, but I sure do appreciate Anderson Cooper for being there.

Thanks, RT, for keeping news about Katrina and her aftermath in the news.

Thanks, Noma, for keeping our Katrina discussion going. Because I'm writing educational activities for the Faces of Katrina exhibit - to open in August - the flood is on my desk.

Of course, the wasted money story is little about the hurricane and mostly about the laxity and incompetence of bureaucrats.

As a Hurricane Katrina victim, it's amazing to me that so many people have gotten away with so much fraud when FEMA has put the rest of us through the ringer for what little assistance we received. I'm so greatful for the artists, songwriters and musicians around the country who chipped in to help us get back on our feet. Within two days after the destruction, we were getting mail from people we didn't know due to a friend in California sending out a mass emailing to contacts they had around the U.S. There is no way to express how greatful we are for their generosity.