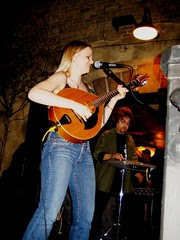 11-5-05 Beth (11)
Originally uploaded by Chad Smalley.
Doyle Jeter's energy for musical production does not seem to have flagged, based on the continued success of his Enoch's Irish Pub and Cafe (enochsirishpub.com, a site rich with links) and the addition of his NE Louisiana Celtic Fest. The fest web site, nelacelticfest.org, says the first event drew some 3000. Certainly, perusing the performers' bios on that site is an education in the Celtic music scene. The producer and artist (the Eye20 Group) Jeter has announced that this year's Celt fest will run 2 days: Oct 7 & 8.

Among the announcements he asks, "Would you like to be involved in this year's festival? We are looking for volunteers. If you're interested, email us at volunteers@nelacelticfest.org."

One of the performers on the 06 Fest bill is Beth Patterson (see photo), a girl raised in Lafayette, La, but based in New Orleans. Patterson has a marvelous career, recording and touring and getting her music into movies. Her web site is littlebluemen.com/beth.

Jeter made a considerable impact on Shreveport when he operated Enoch's. He brought in a who's who of Texas musicians and showcased top locals. If you miss his programming, you may want to nip over to Monroe when you read the Monroe schedule. While it is an Irish pub, he does not hesitate to bring in eclectic musicians such as Kenny Stinson, Melody Moore and even New Orleanian Doug Duffey (Fr, June 30).