Buffalo Bayou Art Park, Houston: an example of how to develop the ill-settled banks of the Red River 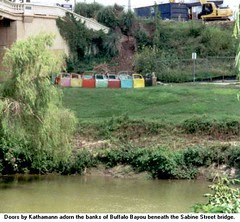 Buffalo Bayou Art Park, Houston: Art Park Doors photo from Gorski & Aulbach essay
Originally uploaded by trudeau.
Bushmasters and the non-sunburned are having informal turf struggles on the banks of the Red River, says the Times. That's not surprising since the city is ill-equipped (as in a yawning lack of leadership) to develop river bank usage policies and boundaries.

One way out of the morass is to scrutinize other cities' solutions to similar problems. I call upon the Times to send out a reporter - is there a local TV station who would consider this a worthy project? ha - to find cities with similar resources and problems.

My inspiration for Red River bank development comes from Houston. Crawling through downtown Houston is a green, muddy channel called Buffalo Bayou. It is incongrous given the high-dollar developments above it: nifty bridges, office towers, concert halls, mini-parks, rapid rail terminals, etc. But alongside it runs an item that you and I could imitate: a series of funky art installations set in the grassy neutral ground. It's called Buffalo Bayou Art Park.

The art includes some of the bronze geometric pieces that we expect in public art. But a lot of it is folksy stuff, such as a gigantic alligator convincingly constructed from old auto tires. It all seems vandal proof, by the way.

1) Lobby the city to set boundaries for the motorized vehicles that are chomping the near-downtown banks of the Red. Create a more clearly-defined family use region.
2) Promote discussion of the pedestrian bridge idea.
3) Make long range plans for an art park along the Red.

The Project SB report is very readable, having been prepared for a powerpoint-type presentation: http://www.shreveporttimes.com/assets/pdf/D926669428.PDF.

Research Buffalo Bayou Art Park, too. If you haven't walked it, someone you know probably has. And let me know your thoughts.
Posted by Robert E Trudeau at 8:50 AM

There are some great bike trails in the river bottom between the Stoner boat launch and Hamels. Trail runners use some of them, too. Getting the city involved would ruin a lot of that. Most cities have no clue how to design good bike trails. I certainly don't trust Shreveport to make a good bike trail.

why aren't you on the committee, Robert?

Thanks for asking, Debbie. No one else has.

Their .pdf prooves my suspicion that they are ideologically beneath you...sadly, that's the same language that the economic development cogs were using in the early 90's. I see that no new progress has been made in that realm during the last 15 years. *yawn*

How sad, how sad.

The Buffalo Bayou Partnership is an organisation responsible for developing and facilitating improvements in the Buffalo Bayou greenway system. Read more about it and links to other such organisations in Texas.(http://www.dickweekley.com/affiliations.html)