Tribute to Leadbelly: little music fest in funky downtown on Sat, May 13, all day 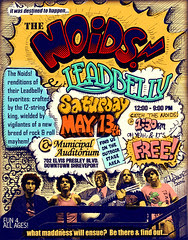 NoidsLeadbelly
Originally uploaded by trudeau.
Another hella poster from Paul Garner of the Noids; re their appearance at the Tribute to Leadbelly Fest outside the Municipal Auditorium, Sat, May 13. They appear with the Caddo magnet High school group of writers called the Leadbelly Society at 1:30 pm.

Leadbelly Society was formed by Rachel Hill and myself as a way to combine writers and musicians. It is dominated by efective writers like Hill, Monika Kumar, Caz Verbois and Meredith Maines.

The musical personages scheduled for the 2-stage fest is as vivid as a basket of ripe avocados. I'll post them later; you might make plans to support it with your jivin presence.
Posted by Robert E Trudeau at 7:33 PM