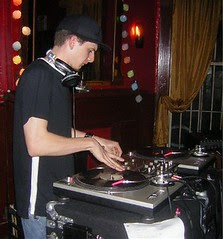 "What's Good People?!" says our friend Martin Arceneaux, aka Dj Quickie Mart ina recent email. He waxes on, " Looks like June is a busy month for eveyone.....The vinyl y'all have been sending me is slammin! Sorry If I haven't got back on some feedback lately, but I've been on the road and givin it mad burn. Coming up, I'll be on the Fish Can't Carry Guns Tour, and performing @ the Bonnaroo Music and Arts Festival for the second year in a row."

For the scene etiquette that governs b-boys today let's check a Crescent City description of a Mart show last summer: "The White B**ch presented Tampa Hip-Hop group Red Tide at The Circle Bar Sunday night. He acted as MC throughout the night, playing songs here and there and sitting in with each artist. D.J. Quickie Mart, who has the highest profile among D.J.'s in New Orleans, showed up as a fan. The White B**ch wanted to make sure Red Tide was introduced to Quickie Mart because he felt they were the best in their cities.

Apparently the meeting went well. D.J. Quickie Mart played an unannounced set before Red Tide hit the bar's living room. It's always fun to watch D.J. Quickie Mart because he plays stuff I've never heard before. I didn't recognize one of the songs he played, which doesn't say much for my knowledge of underground Hip-Hop. Still, in being introduced to fresh things, ignorance was bliss.

Quickie Mart cut the records with majesty. Restraint and style. At times, though, he seemed to show off a bit more than usual. Maybe for the sake of Red Tide, who were looking on. He increased the pace of the cutting, keeping the pace while spinning around, going underneath his leg, and using his elbows.

Most D.J.'s seem to concentrate long and hard on matching beats, but it wadn't no thang for Quickie Mart. Before I had enough time to realize he was matching, the next song was upon the audience."