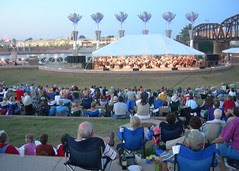 Shreveport's Riverside Park - on the Red River
Originally uploaded by trudeau.
"It feels like San Diego. Look at the water, boats, orchestra, laid-back crowd, the amphitheater effect," said Rick Larsen from the top of Shreveport's Riverview Park. Indeed, the people I interviewed were heartily enthusiastic about the combination of park and orchestra at the SSO Picnic Pops concert on May 20.

"The city gave us the extra funding required to produce this concert," said SSO manager Janice Nelson. "Ordinarily we would perform at Expo hall. But the city sold Expo Hall so that it could be developed as a movie facility. We hope they will continue to support the symphony in this outdoor concert in the years to come."

Arriving at the show by bicycle were teens Destine Toro, Peter Feterman and Victoria Ordonez. "We pedaled up from Highland," said Toro. "It's a perfect day for the bikes."

Though the fountains at Riverview plaza were not active, the vivid lights embedded in the plaza offered stimulation to pedestrians and photographers. Kids played in the lower basin and threw footballs in the grassy area under the railroad tracks.

In a vivid blue shirt was the symphony's new conductor, Michael Butterman. He will be the full time music director next season, said Scott Green, SSO marketing director. .

Those feeling symphonic about Shrevetown might ring up for tickets. The SSO is at 227-8863. There's also shreveportsymphony.com.
Posted by Robert E Trudeau at 8:17 AM