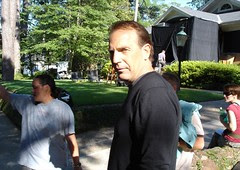 "We have made two films now in Shreveport and Bossier City and everyone has treated us incredibly well, opening up their hearts, their homes and their businesses to us," said actor-producer Kevin Costner in announcing a June 9 Municipal Auditorium benefit concert.

Costner said he would be joined on what was once the Louisiana Hayride stage by mondoguitarist James Burton. Costner, a guitarist and a singer, will perform a selection of original rock 'n' roll music along with songs written by his friends and featured in his films, said Municipal Auditorium honcho Johnny Wessler.

"The proceeds of the concert at the 3,000-seat auditorium on Elvis Presley Avenue will go toward local nonprofit groups selected by Costner, whose current local film project, "Mr. Brooks," wraps in June. They are the Friends of the Municipal Auditorium, James Burton International Guitar Festival, Hal Sutton Foundation and the Robinson Film Center," said Times writer Jennifer Flowers.