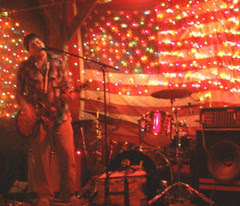 Jason Hollis is a rhymin' chunk of churning funk, if you'll pardon my Phoenician. He describes his style thusly: "I could say it's this, I could say it's that, but basically it's funky soul-driven psychedelic trip-hop rock. See what i mean?"

He has been a member of the funk band Brown through their 10-year odyssey, which centered around New Orleans and Shreveport. That means we can expect to see Hollis joined by Brown family members Christian Harold and Michael Welch and maybe even DJ Quickie Mart. Check his recorded sounds at myspace.com/brownfamily and at myspace.com/themusicofmylifeashollis