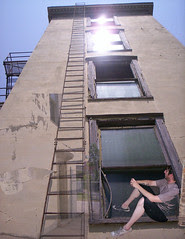 In regards the photo which has won her a spot in a nationally juried show, Baton Rouge's Current, the Aesthetics of Contemporary Culture, artist Joanna Ballard says, "It is the old fire tower downtown. The practice one. The young man was at a minicine event at Tipitina's; no one here recognizes him so we think he might be one of the performers that came in from California for the event. I transposed the front of the building and popped out the graffiti on top of the side of the building and pulled the graffiti forward, thus the title of the work and the reason I put the front on there." See Ballard's work in the Meadows Museum of Art Triennial show as well as at:

Current / the Aesthetics of Contemporary Culture
A National Juried Show