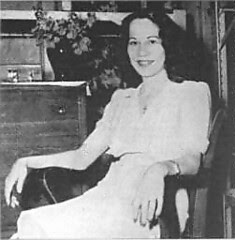 Toni Jo Henry
Originally uploaded by trudeau
"Come meet Sarah Hudson Pierce," says the very active local publisher, "owner of Ritz Publications, at a book fair to be held on June 3rd from 1 to 3 pm at the Court Yard Coffee House, 7436 Youree Drive in Shreveport. The fair will be held on the covered patio if the weather permits."

The book fair will showcase some of Ritz Publications' latest offerings including Stone Justice by Debi King McMartin and Lyn Morgan with an introduction by Eric J. Brock.

Stone Justice is the life of Toni Jo Henry of Shreveport, the only woman to be executed in Louisiana's electric chair. A movie, The Pardon, is presently being filmed locally by producer Rand Falbaum. It was adapted from Stone Justice.

The authors will be on hand to sign limited edition copies of the original Stone Justice screenplay. Debi and Lyn have also written another screenplay, Lethal Alliance. It is being produced locally by Nandar of Los Angeles and will be filmed in North Louisiana.

Callamura is North Louisiana's Gone With The Wind and is currently being written into a screenplay by local authors Lyn Morgan, Debi King McMartin and Ejay Colvin.

Angel Agnes, by Wesley Bradshaw, an 1870s era novel about the great 1873 yellow fever epidemic in Shreveport, will also be available. Angel Agnes has been updated with an introduction by Eric Brock.

Some of the other books available at the fair will be Tinkerbelle by Robert Manry, of Cleveland, Ohio. He sailed the smallest sailboat alone across the Atlantic in 1965. Manry the sailor was a cousin to the late John Manry, Bossier Parish historian, of Plain Dealing. In the 60's Robert visited Plain Dealing and one day was designated as Robert Manry Day. Robert spoke to several clubs in the area, including the Woman's Department Club where he told of his adventure across the Atlantic.

This event will give the public the opportunity to to meet the publisher, some of the authors and discuss how authors may get a book published by Ritz Publications.