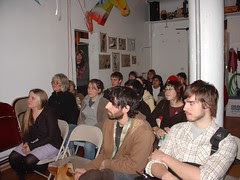 Gadabout organizer Eric Ayotte returns to Shreveport in the Gadabout Eco-Mozola powered van, with a bevy of independent film shorts from DIY filmmakers from around the country and the globe.

As in previous tours the Gadabout Film Festival will have a range of work, from comedy, tweaked narrative, to experimental and will open the evening with their own acoustic music performance...

It is also hoped that they are again traveling with their zine and art bistro... whatever, they always have surprise extra stuff going on...

*Come try out the range of super comfy conference room chairs minicine has for this show...


Follow the notanalternative link to see more photos of Gadabout's appearance in Brooklyn.
Posted by Robert E Trudeau at 3:55 PM