Roman Gabriel Todd's Beats Rising Out of the Sea and the Noids at Big D's BBQ Wed, May 23, 8 pm 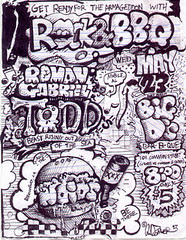 Roman Gabriel Todd's Beats Rising Out of the Sea (alabama punkjazz band) will be performing with the local sensation, the Noids! Wed, May 23rd, at Big D's BBQ. It's at 101 Common St, corner of Common and Caddo. Google map it."