Dutch and Danes are models in biking to work; nations try to get more people to divide time between 2 wheels and 4 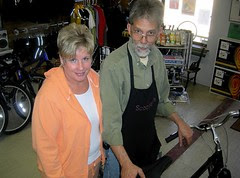 Susan & Scott Robertson: Scooter's Bike Shop
Originally uploaded by trudeau.
The Wall St Journal of May 4 says, "Flat, compact and temperate, the Netherlands and Denmark have long been havens for bikers. In Amsterdam, 40% of commuters get to work by bike. In Copenhagen, more than a third of workers pedal to their offices. But as concern about global warming intensifies -- the European Union is already under emissions caps and tougher restrictions are expected -- the two cities are leading a fresh assault on car culture. . .

The rest of Europe is paying close attention. Officials from London, Munich and Zurich (plus a handful from the U.S.) have visited Amsterdam's transportation department and coffeehouses for advice on developing bicycle-friendly infrastructure and policies.

Norway aims to raise bicycle traffic to at least 8% of all travel by 2015 -- double its current level -- while Sweden hopes to move from 12% to 16% by 2010. This summer, Paris will put thousands of low-cost rental bikes throughout the city to cut traffic, reduce pollution and improve parking."

One of the points made by the WSJ is that you don't have to try to retire your car. Simply splitting time between bike and auto can be advantageous to our society.

Thanks to Kathryn Fontaine for the reference.
Posted by Robert E Trudeau at 6:39 PM

if you ride,
will suv-lovin' s'porters
follow? doubt it, but I say
let's Ride On!