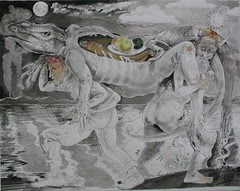 Lee Baxter Davis / Genesis / Lizard Cult
Originally uploaded by trudeau
One of the most promising, serious and funky artists in Shreveport is the low-key C. Mark Burt. This week he's going to NYC to see his work being presented in a group show called The Lizard Cult. It's at one of Manhattan's best-known art shops, the Clementine Gallery.

The back story comprises one of those Texas road-kill tales that we know from the music world. But this one's in painting and sketching. It goes like this, says the Clementine: "In the 1970¹s at East Texas State University, (now A & M Commerce), Art Professor Lee Baxter Davis and his most devoted students were referred to as The Lizard Cult. Davis, an artist and regional icon who has only recently gained wider recognition, composes deeply personal and exhaustively complicated psychological narratives steeped in his own eccentric brand of fire and brimstone mythology. His richly layered ink and watercolor drawings reveal not only the vision and insight that made Davis such a compelling teacher, but the tremendous influence he had upon his students¹ ideas about art and art-making."

Burt has inherited the Lizard sense of "discipline and ritual." He describes his schooling at Texas A&M Commerce as both competitive and passionate. He added, "They taught us to talk about what we were doing and to be professional in the work."

Davis gave his students a distorted universe aesthetic and an iconography to go with it. His work draws upon Donald Duck, Mad comics, Poe and O'Connor. Burt says he found similar inspiration in the 60's figures Big Daddy Roth and Robert Williams as well as Robert Crumb.

The Lizard stars are Gary Panter, called the king of punk art by the media, and Trenton Doyle Hancock, recently profiled by PBS.