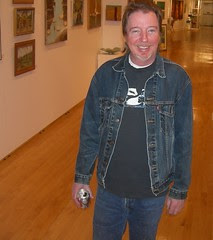 Flett has released his first solo CD, Mississippi Sea. Hear it at myspace.com/buddyflett. The release party for Mississippi Sea will be at Noble savage Tavern, Tex St, on Wed, May 16, 8 pm.

Mississippi Sea features 12 songs recorded at Sandbox Studios. Bruce Flett says "It has received a very warm reception since its release Ap 24, including a stellar review in New Orleans Times Picayune Jazzfest Jukebox on Ap 28. It is already #8 on an Australia blues chart, and is making airwaves on both sides of the Mighty Mississippi as well as in Europe. Eight of the songs are original and all feature Buddy on acoustic guitar and vocals. It was released on Out of the Past Records and produced by Flett and Darren Osborn. More information at www.stevehowell.ws."

Buddy recently returned from the national “Blues From the Backroads” tour with Kenny Wayne Shepherd and blues legends.